this page is still a work in progress

Here is a list of general ideas for improving simulation performance. Most of them are only applicable to certain models and certain bottlenecks in the current performance, so let the timing data you generate be your guide. It is hard, if not impossible, to predict how much difference these options will make, since it is a function of problem size, number of processors used, and your machine. There is no substitute for identifying performance bottlenecks, and trying out various options.

Two-FFT PPPM, also called analytic differentiation or ad PPPM, uses 2 FFTs instead of the 4 FFTs used by the default ik differentiation PPPM. However, 2-FFT PPPM also requires a slightly larger mesh size to achieve the same accuracy as 4-FFT PPPM. For problems where the FFT cost is the performance bottleneck (typically large problems running on many processors), 2-FFT PPPM may be faster than 4-FFT PPPM. 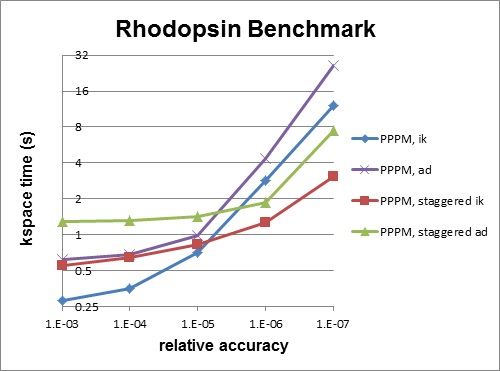 Using staggered PPPM may not give the same increase in accuracy of energy and pressure as it does in forces, so some caution must be used if energy and/or pressure are quantities of interest, such as when using a barostat.