The support for building LAMMPS with CMake is a recent addition to LAMMPS thanks to the efforts of Christoph Junghans (LANL) and Richard Berger (Temple U). One of the key strengths of CMake is that it is not tied to a specific platform or build system and thus generate the files necessary to build and develop for different build systems and on different platforms. Note, that this applies to the build system itself not the LAMMPS code. In other words, without additional porting effort, it is not possible - for example - to compile LAMMPS with Visual C++ on Windows. The build system output can also include support files necessary to program LAMMPS as a project in integrated development environments (IDE) like Eclipse, Visual Studio, QtCreator, Xcode, CodeBlocks, Kate and others.

A second important feature of CMake is, that it can detect and validate available libraries, optimal settings, available support tools and so on, so that by default LAMMPS will take advantage of available tools without requiring to provide the details about how to enable/integrate them.

The downside of this approach is, that there is some complexity associated with running CMake itself and how to customize the building of LAMMPS. This tutorial will show how to manage this through some selected examples. Please see the chapter about building LAMMPS for descriptions of specific flags and options for LAMMPS in general and for specific packages.

All details about features and settings for CMake are in the CMake online documentation. We focus below on the most important aspects with respect to compiling LAMMPS.

This tutorial assumes that you are operating in a command-line environment using a shell like Bash.

We also assume that you have downloaded and unpacked a recent LAMMPS source code package or used Git to create a clone of the LAMMPS sources on your compilation machine.

You should change into the top level directory of the LAMMPS source tree all paths mentioned in the tutorial are relative to that. Immediately after downloading it should look like this:

When using CMake the build procedure is separated into multiple distinct phases:

The configuration and compilation of LAMMPS has to happen in a dedicated build directory which must be different from the source directory. Also the source directory (src) must remain pristine, so it is not allowed to “install” packages using the traditional make process and after an compilation attempt all created source files must be removed. This can be achieved with make no-all purge.

You can pick any folder outside the source tree. We recommend to create a folder build in the top-level directory, or multiple folders in case you want to have separate builds of LAMMPS with different options (build-parallel, build-serial) or with different compilers (build-gnu, build-clang, build-intel) and so on. All the auxiliary files created by one build process (executable, object files, log files, etc) are stored in this directory or sub-directories within it that CMake creates.

In the (empty) build directory, we now run the command cmake ../cmake, which will start the configuration phase and you will see the progress of the configuration printed to the screen followed by a summary of the enabled features, options and compiler settings. A typical summary screen will look like this:

The cmake command has one mandatory argument, and that is a folder with either the file CMakeLists.txt or CMakeCache.txt. The CMakeCache.txt file is created during the CMake configuration run and contains all active settings, thus after a first run of CMake all future runs in the build folder can use the folder . and CMake will know where to find the CMake scripts and reload the settings from the previous step. This means, that one can modify an existing configuration by re-running CMake, but only needs to provide flags indicating the desired change, everything else will be retained. One can also mix compilation and configuration, i.e. start with a minimal configuration and then, if needed, enable additional features and recompile.

The steps above will NOT compile the code. The compilation can be started in a portable fashion with cmake --build ., or you use the selected built tool, e.g. make.

For the text mode UI CMake program the basic principle is the same. You start the command ccmake ../cmake in the build folder.

This will show you the initial screen (left image) with the empty configuration cache. Now you type the ‘c’ key to run the configuration step. That will do a first configuration run and show the summary (center image). You exit the summary screen with ‘e’ and see now the main screen with detected options and settings. You can now make changes by moving and down with the arrow keys of the keyboard and modify entries. For on/off settings, the enter key will toggle the state. For others, hitting enter will allow you to modify the value and you commit the change by hitting the enter key again or cancel using the escape key. All “new” settings will be marked with a star ‘*’ and for as long as one setting is marked like this, you have to re-run the configuration by hitting the ‘c’ key again, sometimes multiple times unless the TUI shows the word “generate” next to the letter ‘g’ and by hitting the ‘g’ key the build files will be written to the folder and the TUI exits. You can quit without generating build files by hitting ‘q’.

For the graphical CMake program the steps are similar to the TUI version. You can type the command cmake-gui ../cmake in the build folder. In this case the path to the CMake script folder is not required, it can also be entered from the GUI.

Again, you start with an empty configuration cache (left image) and need to start the configuration step. For the very first configuration in a folder, you will have a pop-up dialog (center image) asking to select the desired build tool and some configuration settings (stick with the default) and then you get the option screen with all new settings highlighted in red. You can modify them (or not) and click on the “configure” button again until satisfied and click on the “generate” button to write out the build files. You can exit the GUI from the “File” menu or hit “ctrl-q”.

Options that enable, disable or modify settings are modified by setting the value of CMake variables. This is done on the command line with the -D flag in the format -D VARIABLE=value, e.g. -D CMAKE_BUILD_TYPE=Release or -D BUILD_MPI=on. There is one quirk: when used before the CMake directory, there may be a space between the -D flag and the variable, after it must not be. Such CMake variables can have boolean values (on/off, yes/no, or 1/0 are all valid) or are strings representing a choice, or a path, or are free format. If the string would contain whitespace, it must be put in quotes, for example -D CMAKE_TUNE_FLAGS="-ftree-vectorize -ffast-math".

CMake variables fall into two categories: 1) common CMake variables that are used by default for any CMake configuration setup and 2) project specific variables, i.e. settings that are specific for LAMMPS. Also CMake variables can be flagged as advanced, which means they are not shown in the text mode or graphical CMake program in the overview of all settings by default, but only when explicitly requested (by hitting the ‘t’ key or clicking on the ‘Advanced’ check-box).

The LAMMPS software is organized into a common core that is always included and a large number of add-on packages that have to be enabled to be included into a LAMMPS executable. Packages are enabled through setting variables of the kind PKG_<NAME> to on and disabled by setting them to off (or using yes, no, 1, 0 correspondingly). <NAME> has to be replaced by the name of the package, e.g. MOLECULE or EXTRA-PAIR.

Since LAMMPS has a lot of optional features and packages, specifying them all on the command line can be tedious. Or when selecting a different compiler toolchain, multiple options have to be changed consistently and that is rather error prone. Or when enabling certain packages, they require consistent settings to be operated in a particular mode. For this purpose, we are providing a selection of “preset files” for CMake in the folder cmake/presets. They represent a way to pre-load or override the CMake configuration cache by setting or changing CMake variables. Preset files are loaded using the -C command line flag. You can combine loading multiple preset files or change some variables later with additional -D flags. A few examples:

The first command will install the packages KSPACE, MANYBODY, MOLECULE, RIGID and MISC; the first four from the preset file and the fifth from the explicit variable definition. The second command will first switch the compiler toolchain to use the Clang compilers and install a large number of packages that are not depending on any special external libraries or tools and are not very unusual. The third command will enable the first four packages like above and then enforce compiling LAMMPS as a serial program (using the MPI STUBS library).

It is also possible to do this incrementally.

will achieve the same final configuration as in the first example above. In this scenario it is particularly convenient to do the second configuration step using either the text mode or graphical user interface (ccmake or cmake-gui).

Using a preset to select a compiler package (clang.cmake, gcc.cmake, intel.cmake, oneapi.cmake, or pgi.cmake) are an exception to the mechanism of updating the configuration incrementally, as they will trigger a reset of cached internal CMake settings and thus reset settings to their default values.

When calling the build program, you can also select which “target” is to be build through appending the --target flag and the name of the target to the build command. When using make as build tool, you can just append the target name to the command. Example: cmake --build . --target all or make all. The following abstract targets are available:

While CMake usually defaults to creating makefiles to compile software with the make program, it supports multiple alternate build tools (e.g. ninja-build which tends to be faster and more efficient in parallelizing builds than make) and can generate project files for integrated development environments (IDEs) like VisualStudio, Eclipse or CodeBlocks. This is specific to how the local CMake version was configured and compiled. The list of available options can be seen at the end of the output of cmake --help. Example on Fedora 31 this is:

Below is a screenshot of using the CodeBlocks IDE with the ninja build tool after running CMake as follows: 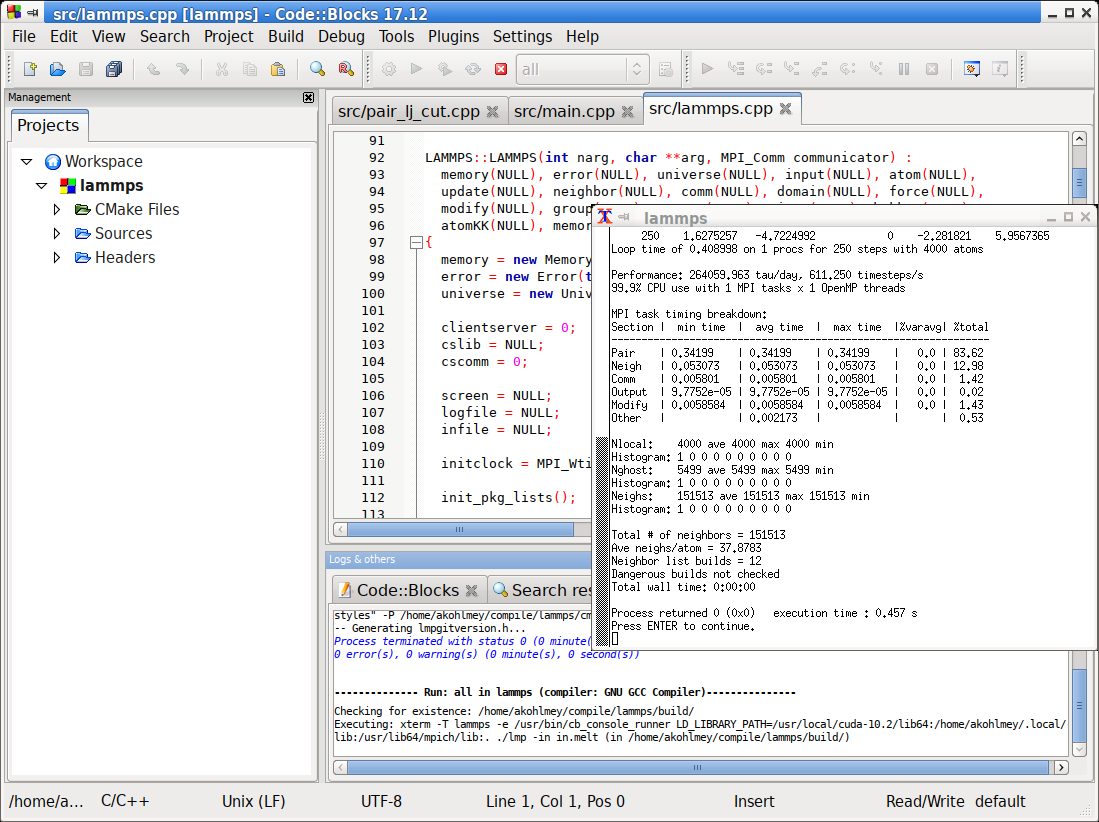