where \(K\) is the force constant and \(\omega\) is the angle evaluated for all three axis-plane combinations centered around the atom I. For the IL axis and the IJK plane \(\omega\) looks as follows: 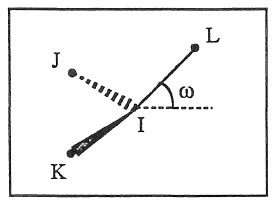 Note that the inversion/harmonic angle term evaluation differs to the improper_umbrella due to the cyclic evaluation of all possible angles \(\omega\).

This improper style can only be used if LAMMPS was built with the MOFFF package. See the Build package doc page for more info.