The source files of the LAMMPS code are found in two directories of the distribution: src and lib. Most of the code is written in C++ but there are small a number of files in several other languages like C, Fortran, Shell script, or Python.

The core of the code is located in the src folder and its sub-directories. A sizable number of these files are in the src directory itself, but there are plenty of packages, which can be included or excluded when LAMMPS is built. See the Include packages in build section of the manual for more information about that part of the build process. LAMMPS currently supports building with conventional makefiles and through CMake. Those procedures differ in how packages are enabled or disabled for inclusion into a LAMMPS binary so they cannot be mixed. The source files for each package are in all-uppercase sub-directories of the src folder, for example src/MOLECULE or src/EXTRA-MOLECULE. The src/STUBS sub-directory is not a package but contains a dummy MPI library, that is used when building a serial version of the code. The src/MAKE directory and its sub-directories contain makefiles with settings and flags for a variety of configuration and machines for the build process with traditional makefiles.

The lib directory contains the source code for several supporting libraries or files with configuration settings to use globally installed libraries, that are required by some of the optional packages. They may include python scripts that can transparently download additional source code on request. Each sub-directory, like lib/poems or lib/gpu, contains the source files, some of which are in different languages such as Fortran or CUDA. These libraries included in the LAMMPS build, if the corresponding package is installed.

LAMMPS C++ source files almost always come in pairs, such as src/run.cpp (implementation file) and src/run.h (header file). Each pair of files defines a C++ class, for example the LAMMPS_NS::Run class which contains the code invoked by the run command in a LAMMPS input script. As this example illustrates, source file and class names often have a one-to-one correspondence with a command used in a LAMMPS input script. Some source files and classes do not have a corresponding input script command, e.g. src/force.cpp and the LAMMPS_NS::Force class. They are discussed in the next section.

The names of all source files are in lower case and may use the underscore character ‘_’ to separate words. Outside of bundled libraries which may have different conventions, all C and C++ header files have a .h extension, all C++ files have a .cpp extension, and C files a .c extension. A small number of C++ classes and utility functions are implemented with only a .h file. Examples are the Pointers and Commands classes or the MathVec functions.

Though LAMMPS has a lot of source files and classes, its class topology is not very deep, which can be seen from the LAMMPS class topology figure. In that figure, each name refers to a class and has a pair of associated source files in the src folder, for example the class LAMMPS_NS::Memory corresponds to the files memory.cpp and memory.h, or the class LAMMPS_NS::AtomVec corresponds to the files atom_vec.cpp and atom_vec.h. Full lines in the figure represent compositing: that is the class at the base of the arrow holds a pointer to an instance of the class at the tip. Dashed lines instead represent inheritance: the class to the tip of the arrow is derived from the class at the base. Classes with a red boundary are not instantiated directly, but they represent the base classes for “styles”. Those “styles” make up the bulk of the LAMMPS code and only a few representative examples are included in the figure so it remains readable. 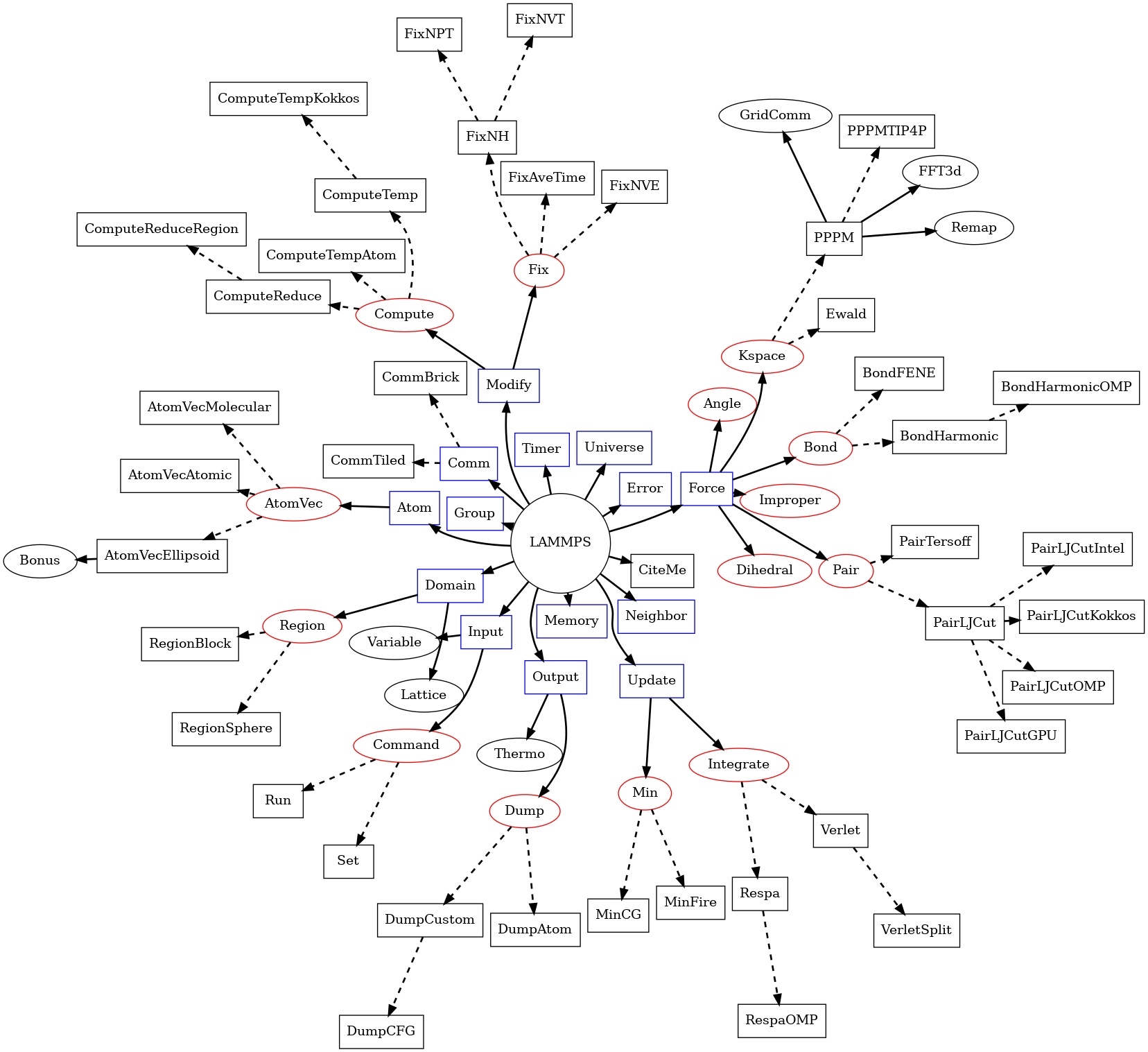 This figure shows some of the relations of the base classes of the LAMMPS simulation package. Full lines indicate that a class holds an instance of the class it is pointing to; dashed lines point to derived classes that are given as examples of what classes may be instantiated during a LAMMPS run based on the input commands and accessed through the API define by their respective base classes. At the core is the LAMMPS class, which holds pointers to class instances with specific purposes. Those may hold instances of other classes, sometimes directly, or only temporarily, sometimes as derived classes or derived classes of derived classes, which may also hold instances of other classes.

The LAMMPS_NS::LAMMPS class is the topmost class and represents what is generally referred to an “instance” of LAMMPS. It is a composite holding pointers to instances of other core classes providing the core functionality of the MD engine in LAMMPS and through them abstractions of the required operations. The constructor of the LAMMPS class will instantiate those instances, process the command line flags, initialize MPI (if not already done) and set up file pointers for input and output. The destructor will shut everything down and free all associated memory. Thus code for the standalone LAMMPS executable in main.cpp simply initializes MPI, instantiates a single instance of LAMMPS while passing it the command line flags and input script. It deletes the LAMMPS instance after the method reading the input returns and shuts down the MPI environment before it exits the executable.

Since all storage is supposed to be encapsulated (there are a few exceptions), the LAMMPS class can also be instantiated multiple times by a calling code. Outside of the aforementioned exceptions, those LAMMPS instances can be used alternately. As of the time of this writing (early 2021) LAMMPS is not yet sufficiently thread-safe for concurrent execution. When running in parallel with MPI, care has to be taken, that suitable copies of communicators are used to not create conflicts between different instances.

The LAMMPS class currently (early 2021) holds instances of 19 classes representing the core functionality. There are a handful of virtual parent classes in LAMMPS that define what LAMMPS calls styles. They are shaded red in the LAMMPS class topology figure. Each of these are parents of a number of child classes that implement the interface defined by the parent class. There are two main categories of these styles: some may only have one instance active at a time (e.g. atom, pair, bond, angle, dihedral, improper, kspace, comm) and there is a dedicated pointer variable for each of them in the composite class. Setups that require a mix of different such styles have to use a hybrid class that takes the place of the one allowed instance and then manages and forwards calls to the corresponding sub-styles for the designated subset of atoms or data. The composite class may also have lists of class instances, e.g. Modify handles lists of compute and fix styles, while Output handles a list of dump class instances.

The exception to this scheme are the command style classes. These implement specific commands that can be invoked before, after, or in between runs. For these an instance of the class is created, its command() method called and then, after completion, the class instance deleted. Examples for this are the create_box, create_atoms, minimize, run, set, or velocity command styles.

For all those styles certain naming conventions are employed: for the fix nve command the class is called FixNVE and the source files are fix_nve.h and fix_nve.cpp. Similarly for fix ave/time we have FixAveTime and fix_ave_time.h and fix_ave_time.cpp. Style names are lower case and without spaces or special characters. A suffix or words are appended with a forward slash ‘/’ which denotes a variant of the corresponding class without the suffix. To connect the style name and the class name, LAMMPS uses macros like: AtomStyle(), PairStyle(), BondStyle(), RegionStyle(), and so on in the corresponding header file. During configuration or compilation files with the pattern style_<name>.h are created that consist of a list of include statements including all headers of all styles of a given type that are currently active (or “installed).

More details on individual classes in the LAMMPS class topology are as follows: