Fix wall/ees bounds the simulation domain on one or more of its faces with a flat wall that interacts with the ellipsoidal atoms in the group by generating a force on the atom in a direction perpendicular to the wall and a torque parallel with the wall. The energy of wall-particle interactions E is given by: 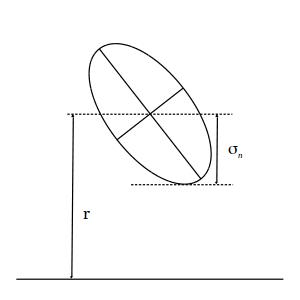 Details of using this command and specifications are the same as fix/wall command. You can also find an example in USER/ees/ under examples/ directory.

The prefactor \(\epsilon\) can be thought of as an effective Hamaker constant with energy units for the strength of the ellipsoid-wall interaction. More specifically, the \(\epsilon\) prefactor is

Fix wall/region/ees treats the surface of the geometric region defined by the region-ID as a bounding wall which interacts with nearby ellipsoidal particles according to the EES potential introduced above.

Other details of this command are the same as for the fix wall/region command. One may also find an example of using this fix in the examples/PACKAGES/ees/ directory.

No information about these fixes are written to binary restart files.

The fix_modify respa option is supported by these fixes. This allows to set at which level of the r-RESPA integrator the fix is adding its forces. Default is the outermost level.

These fixes computes a global scalar and a global vector of forces, which can be accessed by various output commands. See the fix wall command for a description of the scalar and vector.

No parameter of these fixes can be used with the start/stop keywords of the run command.

The forces due to these fixes are imposed during an energy minimization, invoked by the minimize command.

If you want the atom/wall interaction energy to be included in the total potential energy of the system (the quantity being minimized), you MUST enable the fix_modify energy option for this fix.

These fixes are part of the EXTRA-FIX package. They are only enabled if LAMMPS was built with that package. See the Build package page for more info.

These fixes requires that atoms be ellipsoids as defined by the atom_style ellipsoid command.