This command adjusts the size and shape of processor sub-domains within the simulation box, to attempt to balance the number of particles and thus the computational cost (load) evenly across processors. The load balancing is “dynamic” in the sense that re-balancing is performed periodically during the simulation. To perform “static” balancing, before or between runs, see the balance command.

Load-balancing is typically most useful if the particles in the simulation box have a spatially-varying density distribution or where the computational cost varies significantly between different atoms (e.g., a model of a vapor/liquid interface, or a solid with an irregular-shaped geometry containing void regions, or hybrid pair style simulations that combine pair styles with different computational cost). In these cases, the LAMMPS default of dividing the simulation box volume into a regular-spaced grid of 3d bricks, with one equal-volume sub-domain per processor, may assign numbers of particles per processor in a way that the computational effort varies significantly. This can lead to poor performance when the simulation is run in parallel.

Note that the processors command allows some control over how the box volume is split across processors. Specifically, for a \(P_x \times P_y \times P_z\) grid of processors, it allows choices of \(P_x\), \(P_y\), and \(P_z\) subject to the constraint that \(P_x P_y P_z = P\), the total number of processors. This is sufficient to achieve good load-balance for some problems on some processor counts. However, all the processor sub-domains will still have the same shape and the same volume.

As an example, for 10000 particles running on 10 processors, if the most heavily loaded processor has 1200 particles, then the imbalance factor is 1.2, meaning there is a 20% imbalance. Note that re-balances can be forced even if the current balance is perfect (1.0) be specifying a thresh < 1.0.

This command attempts to minimize the imbalance factor, as defined above. But depending on the method a perfect balance (1.0) may not be achieved. For example, “grid” methods (defined below) that create a logical 3d grid cannot achieve perfect balance for many irregular distributions of particles. Likewise, if a portion of the system is a perfect, non-rotated lattice (e.g., the initial system is generated by the create_atoms command with no rotations), then “grid” methods may be unable to achieve exact balance. This is because entire lattice planes will be owned or not owned by a single processor.

The imbalance factor is also an estimate of the maximum speed-up you can hope to achieve by running a perfectly balanced simulation versus an imbalanced one. In the example above, the 10000-particle simulation could run up to 20% faster if it were perfectly balanced, versus when imbalanced. However, computational cost is not strictly proportional to particle count, and changing the relative size and shape of processor sub-domains may lead to additional computational and communication overheads (e.g., in the PPPM solver used via the kspace_style command). Thus, you should benchmark the run times of a simulation before and after balancing.

The method used to perform a load balance is specified by one of the listed styles, which are described in detail below. There are two kinds of styles.

The shift style is a “grid” method which produces a logical 3d grid of processors. It operates by changing the cutting planes (or lines) between processors in 3d (or 2d), to adjust the volume (area in 2d) assigned to each processor, as in the following 2d diagram where processor sub-domains are shown and atoms are colored by the processor that owns them. 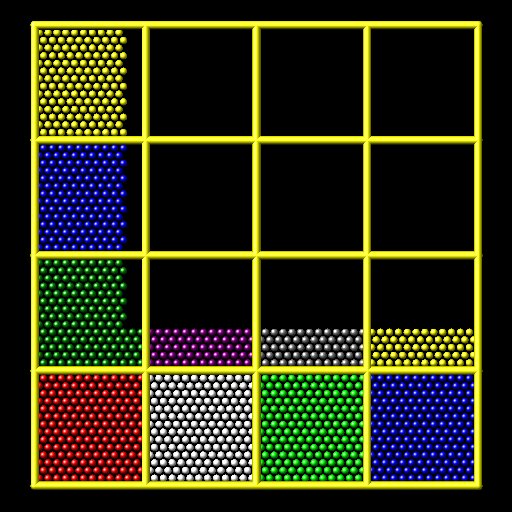 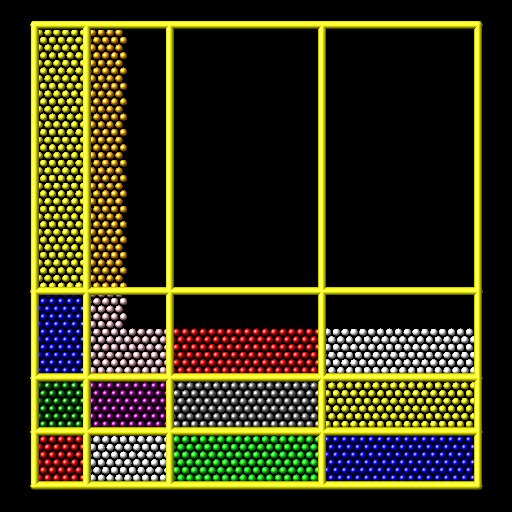 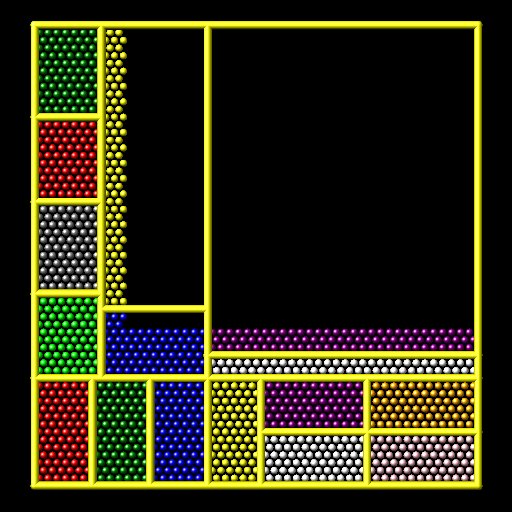 The leftmost diagram is the default partitioning of the simulation box across processors (one sub-box for each of 16 processors); the middle diagram is after a “grid” method has been applied. The rcb style is a “tiling” method which does not produce a logical 3d grid of processors. Rather it tiles the simulation domain with rectangular sub-boxes of varying size and shape in an irregular fashion so as to have equal numbers of particles (or weight) in each sub-box, as in the rightmost diagram above.

When a “tiling” method is specified, the current domain partitioning (“grid” or “tiled”) is ignored, and a new partitioning is computed from scratch.

The group-ID is ignored. However the impact of balancing on different groups of atoms can be affected by using the group weight style as described below.

On re-balance steps, re-balancing will only be attempted if the current imbalance factor, as defined above, exceeds the thresh setting.

The shift style invokes a “grid” method for balancing, as described above. It changes the positions of cutting planes between processors in an iterative fashion, seeking to reduce the imbalance factor.

The dimstr argument is a string of characters, each of which must be x or y or z. Each character can appear zero or one time, since there is no advantage to balancing on a dimension more than once. You should normally only list dimensions where you expect there to be a density variation in the particles.

A re-balance operation in a single dimension is performed using a density-dependent recursive multisectioning algorithm, where the position of each cutting plane (line in 2d) in the dimension is adjusted independently. This is similar to a recursive bisectioning for a single value, except that the bounds used for each bisectioning take advantage of information from neighboring cuts if possible, as well as counts of particles at the bounds on either side of each cuts, which themselves were cuts in previous iterations. The latter is used to infer a density of particles near each of the current cuts. At each iteration, the count of particles on either side of each plane is tallied. If the counts do not match the target value for the plane, the position of the cut is adjusted based on the local density. The low and high bounds are adjusted on each iteration, using new count information, so that they become closer together over time. Thus as the recursion progresses, the count of particles on either side of the plane gets closer to the target value.

The density-dependent part of this algorithm is often an advantage when you re-balance a system that is already nearly balanced. It typically converges more quickly than the geometric bisectioning algorithm used by the balance command. However, if can be a disadvantage if you attempt to re-balance a system that is far from balanced, and converge more slowly. In this case you probably want to use the balance command before starting a run, so that you begin the run with a balanced system.

Once the re-balancing is complete and final processor sub-domains assigned, particles migrate to their new owning processor as part of the normal reneighboring procedure.

At each re-balance operation, the bisectioning for each cutting plane (line in 2d) typically starts with low and high bounds separated by the extent of a processor’s sub-domain in one dimension. The size of this bracketing region shrinks based on the local density, as described above, which should typically be 1/2 or more every iteration. Thus if \(N_\text{iter}\) is specified as 10, the cutting plane will typically be positioned to better than 1 part in 1000 accuracy (relative to the perfect target position). For \(N_\text{iter} = 20\), it will be accurate to better than 1 part in a million. Thus there is no need to set \(N_\text{iter}\) to a large value. This is especially true if you are re-balancing often enough that each time you expect only an incremental adjustment in the cutting planes is necessary. LAMMPS will check if the threshold accuracy is reached (in a dimension) is less iterations than \(N_\text{iter}\) and exit early.

The rcb style invokes a “tiled” method for balancing, as described above. It performs a recursive coordinate bisectioning (RCB) of the simulation domain. The basic idea is as follows.

The simulation domain is cut into two boxes by an axis-aligned cut in the longest dimension, leaving one new box on either side of the cut. All the processors are also partitioned into two groups, half assigned to the box on the lower side of the cut, and half to the box on the upper side. If the processor count is odd, one side gets an extra processor. The cut is positioned so that the number of atoms in the lower box is exactly the number that the processors assigned to that box should own for load balance to be perfect. This also makes load balance for the upper box perfect. The positioning is done iteratively, by a bisectioning method. Note that counting atoms on either side of the cut requires communication between all processors at each iteration.

That is the procedure for the first cut. Subsequent cuts are made recursively, in exactly the same manner. The subset of processors assigned to each box make a new cut in the longest dimension of that box, splitting the box, the subset of processors, and the atoms in the box in two. The recursion continues until every processor is assigned a sub-box of the entire simulation domain, and owns the atoms in that sub-box.

The out keyword writes text to the specified filename with the results of each re-balancing operation. The file contains the bounds of the sub-domain for each processor after the balancing operation completes. The format of the file is compatible with the Pizza.py mdump tool which has support for manipulating and visualizing mesh files. An example is shown here for a balancing by four processors for a 2d problem:

The coordinates of all the vertices are listed in the NODES section, five per processor. Note that the four sub-domains share vertices, so there will be duplicate nodes in the list.

The “SQUARES” section lists the node IDs of the four vertices in a rectangle for each processor (1 to 4).

For a 3d problem, the syntax is similar but with eight vertices listed for each processor instead of four, and “SQUARES” replaced by “CUBES”.

No information about this fix is written to binary restart files. None of the fix_modify options are relevant to this fix.

These quantities can be accessed by various output commands. The scalar and vector values calculated by this fix are “intensive”.

No parameter of this fix can be used with the start/stop keywords of the run command. This fix is not invoked during energy minimization.

For 2d simulations, the z style cannot be used, nor can z appear in dimstr for the shift style.